Use the calendar below to browse the archive by event date.
This archive was developed by the Newcastle Centre for the Literary Arts as part of the nclacommunity.org community of websites
Home   /   A Report on the International Student Short Story Competition by Marleen Van Os

A Report on the International Student Short Story Competition

The second international student short story competition organised by NCLA was received well with international students all over the UK. Seventy short stories were submitted, only twelve of those making the shortlist. The broad assignment to write about any aspect of the experiences of studying abroad produced very different kinds of stories. Touching, funny and inspired accounts reached the judges, but also some heavier, less positive stories that should be heard as well. It was a pleasure reading all of them, and the shortlist shows some real writing talent from students who may not have written stories like this before.

“Here I am, London. I’m here and I’m ready to make the most of the opportunity I’ve been given, take new steps in a new city; take the world by a storm.” (The Miserable Woman)

Many stories started like this, looking towards a new country with feelings of optimism and opportunity. After the arrival in the UK, however, many accounts turned to a less cheerful tone.

Many of the entries had a rather negative approach to studying in the UK. Writers dealt with feelings of uncertainty and not belonging through major cultural differences. Unmet expectations, disappointment, difficulties in making new friends, missing family and troubles with the university were the main topics many of the stories explored in their own ways. More positive accounts were luckily also sent in, like love stories, humorous survival guides, stories about independence and experiencing the student party culture. Still, the main idea behind most of the stories was the feeling of being different.

“It all seems so pure, yet so foreign, so lodged in this wallpaper-covered, tea-drinking, quintessential Britishness.” (The Attempt)

The best stories combined some of the themes and topics mentioned above, especially by writing about their own culture in relation to British culture, the differences, surprises, and their ways of handling it. The shortlisted stories especially talked of ideas of home, religion, meeting and getting to know strangers from different cultures, and not belonging. Some stories showed the better feeling of connection that international students had with other ‘strangers’ in the UK. Contact with other international students, but also with disconnected English people like beggars and Big Issue sellers apparently worked better, since the feeling of otherness created mutual understanding.

“Home is not where you live, but where they understand you.” (Olde Trip Home)

Some of the entrants were creative writing students, but mostly they came from various degrees, ranging from first-year undergraduates to PhD students. They were from very different cultural backgrounds and stages of life, some students just getting used to life away from school and their parents, some already married and settled, and everything in between, from finding the love of their life in England to learning to flirt the English way at student parties. Several writers sent in two or even three stories. In their covering letters, several students thanked the organisation for this writing opportunity. They appreciated the encouragement to write and to be heard as international students. One of the entrants wrote ‘I tried telling it with an honest voice’, and this is visibly true for most stories.

“I tell myself that home is where my passions are, my passions to share messages of equality and understanding. Home is my husband and the few who love and support me unwaveringly. […] But my gut tells me that home is likely a place that time will never return to me.” (In Search of Home)

However honest, some stories were not really stories at all, but more like accounts of daily life or step-by-step descriptions of struggles with the university, illness, and even a campaign-like message of a girl striving to protect the international student welfare at her university. A clear difference could be seen between actual short stories and these more journal-like, straightforward accounts. However interesting these accounts may be, they do not exactly fit the definition of short story and did therefore not make it to the shortlist.

This competition offers a chance for international students to show their perspective, whereas usually people pass them by in the street, hardly paying any attention. Reading these stories, you develop respect for these students, who have had to cope with strong feelings of insecurity, insignificance and being unwelcome. Many of them, in their own ways, dealt with this by befriending people and letting their voices be heard, or actually changing themselves through their experiences here in England. The shortlisted stories all account of students struggling with the new culture that they don’t understand, and that doesn’t understand theirs in return. Still, the stories are touching in their resolutions, which are often happy, or at least filled with personal growth and, in the end, positive experiences and a growing love for the UK.

Several stories dealt with typical British expressions like these, showing the adjusting process by means of learning the local way of speaking.

As an international student myself, I recognised many of the issues addressed in the stories. I am from the Netherlands, and therefore have had fewer difficulties with adapting to the way of life since it is not that different from my own. Still, the sense that many English people are just not that interested in you and that you really have to find your own way was true for me too. The English party culture was shocking to me at first, and I can understand both the urge to try and be part of it and to run away from it. I too have made mostly international friends, just because the connection with them is stronger. Still, I do not really have the sense of not belonging that spoke from many stories, I suppose mainly because my own culture is not that different, or maybe because I have made friends from the beginning and have therefore not felt very alone, as some of the writers have. I have missed home sometimes, but have been fine in the UK just as well. I must admit I had a similar approach to the English with regards to especially Asian students. I suppose in our European eyes they are all similar; they stick together and are hard to talk to because of language and cultural differences. I regret thinking that way now, however, after reading some of their beautiful stories. I can imagine that the international experience is quite hard for them, only feeling really accepted by other Asians around them and therefore continually having a hard time with English language and culture because they don’t engage with it enough.

“You are only what you look like.” (Looking Back)

An important message that arose from the stories was the importance of creating your own happiness in whichever way is good for you. I think that is very important. Being put down by initial bad experiences is not going to help improve the remaining time. Many stories ended like this, with optimism and a drive to have a good time and find happiness in ways that you might not have expected.

“I envy a cobra now. What a wonderful creature, isn’t it? One that can get a new skin for itself at will, just to suit the environment.” (Looking Back) 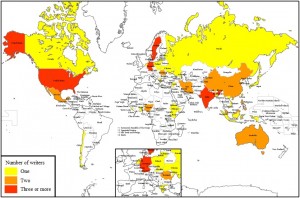 The above map shows the geographical spread of the short story writers. They come from all over the world. The number of writers from every country has been indicated with the different colours. The United States have by far the most representatives, with eight writers in total. India comes second, with four entrants, and the rest of the red coloured countries account for three writers. Two writers came from Hong Kong, which is too small to be seen on the map. One writer each also came from Puerto Rico, Mauritius and Luxembourg. Lastly, one writer was Vietnamese, but living in Ukraine, so both those countries have been coloured. The shortlist carries on this wide geographical spread. Two stories are by Australians and two writers are from the United States, and beside that most other continents are again represented in the final selection.

In terms of universities in the UK where the international students were studying at the time of writing, they are quite well-spread through mostly England. Only two writers studied in Scotland, in Dundee and Glasgow. Two others studied in Wales, in Cardiff and Bangor. Within England there were some cities that stood out. A total of nine writers were studying at Durham University, and another nine in York. Oxford was also well represented with seven, and another seven writers were studying at the different universities in London. Nottingham and Newcastle both brought four writers. Northampton, Birmingham, Winchester, and Liverpool Hope each supplied two. Thirteen other writers came from still different universities spread throughout England.

Putting all the stories together, this word cloud of most frequently used words comes out. These words in a way sum up some of the themes of the stories. The word ‘like’ in the middle, although it is not a very significant word in everyday use, still reflects several ideas in the stories – to like a new place, to be like (or very unlike) other people, to see how one culture is or isn’t like another, and to give examples of experiences. Words like ‘home’, ‘first’, ‘time’, ‘people’ and ‘know’ also appear frequently in the stories, illustrating the ways of getting to know a culture and its people for the first time, far away from home. ‘Back’ is also often used, in looking back to time spent at home, or the time spent in the UK so far, and also going or wanting to go back home.

“But the harder I had fought against the invitation, the more insistent the Joneses had become, until the four of us have become trapped in a little steel box, sealed and compartmentalised in our separate set of etiquette.” (Lily of the Valley)

Many international students were invited to English friends’ houses over Christmas. This is what that would sometimes feel like – a collision of completely different cultures, forcedly put together by the holidays.

All in all, this competition has provided some good insights into international students’ experiences in the UK. I think it is important to give them a voice in this way, and to spread the stories so that everyone – British and other – can read and think about them.

This report on the Newcastle Centre for the Literary Arts International Student Short Story Competition 2012 was written by Marleen van Os.

← In Your Own Time